Yes, Virginia, there is a Santa Claus. He is real because he exists in our hearts and minds.

But did you know, Santa was born in Troy, New York? It’s true. While most people these days are born in a hospital delivery room, Santa Claus entered the world through the pages of the Troy Sentinel on Dec. 23, 1283. That is the date the beloved poem “An Account of a Visit From St. Nicholas” — better known as “‘Twas the Night Before Christmas” — was published for the first time ever by the Troy newspaper.

A bronze plaque on the Troy Sentinel building credits Clement Clark Moore as the author of ‘Twas the Night Before Christmas.

Those magic verses were the first to describe a “jolly old elf” with a belly that “shook when he laugh’d like a bowl full of jelly” entering homes “Down the chimney” to deliver gifts to children, and flying through the night in a “miniature sleigh,” pulled by “eight tiny reindeer” each given names. We later called this distinctly American figure “Santa Claus,” as he was quite different than his predecessor, a 4th-century Christian saint and Greek Bishop from what is today Turkey.

Celebrating St. Nicholas Day on Dec. 6 continues to be popular in The Netherlands. The Dutch call St. Nicholas “Sinterklaas,” and they brought the tradition with them when they settled the Hudson Valley, where Troy, NY is located. The poem “‘Twas the Night Before Christmas” was influenced by uniquely Hudson Valley Dutch traditions, so it’s no surprise that the Jolly Old Elf first appeared here.

One question still remains, though. Who really wrote that beloved poem that made Santa real? When it was first published by the Sentinel, no author was credited. It wasn’t until many years later that a wealthy biblical scholar from Manhattan, Clement Clark Moore, claimed authorship. But for nearly as long, the Dutch descendants of Maj. Henry Livingston, a gentleman farmer from Poughkeepsie, have claimed their ancestor is the true poet. And their argument is compelling enough that scholars still debate the issue.

THE TRIAL BEFORE CHRISTMAS

Jack Casey, left, Mayor Lou Rosamilia and Duncan Crary put on enjoy Troy Santa hats as “Henry Livingston Jr. Day” is proclaimed to be Dec. 23, 2014 in Troy, in honor of the surprise jury verdict after the Dec. 7 “Trial Before Christmas,” held in the Rensselaer County Courthouse in front of Some Girls Boutique on Friday Dec. 19, 2014 in Troy ,N.Y. (Michael P. Farrell/Times Union)

Since the academics haven’t been able to settle the issue on their own, The Enjoy Troy Co.’s writer in residence Duncan Crary decided it was time to put the case on trial. In 2013, Crary organized the first Trial Before Christmas of Livingston v. Moore in the Rensselaer County Courthouse in downtown Troy. The full-blown mock trial featured real attorneys, a retired NYS supreme court justice, real court officials and a jury (“enjoy troy.” creator Linda Passaretti sat in the jury box as an alternate). Troy attorney E. Stewart Jones Jr. represented the Moore claim, while Troy novelist and attorney Jack Casey argued for Livingston with his daughter Molly Casey, also an attorney. The trial made national headlines and caught the world’s attention. But, alas, the jury came back without a verdict.

So the case was retried on Dec. 7, 2015 with each legal team reprising their roles. And this time around, the jurors of Troy came back with an unanimous verdict: Livingston, the upstate underdog, wrote it. During a Dec. 19, 2014 ceremony in front of the Sentinel building, Troy Mayor Lou Rosamilia proclaimed that Dec. 23, 2014 would be “Henry Livingston Jr. Day” in the City of Troy. Our mayor was joined by Sinterklaas and Santa Claus. Also arriving on the scene was Uncle Sam, because Troy, NY is also the hometown of Samuel Wilson, a 19th century meat packer who later became the personification of the United States. Santa, Sinterklaas and Uncle Sam each exchanged their own traditional gifts. Of course Uncle Sam gave Sinterklaas and Santa each an “enjoy troy.” magnet to put on the bumpers of their wagon and sleigh.

You can learn more about The Trial Before Christmas and watch an HD video of the 2014 retrial at http://ChristmasTrial.com.

P.S. Isn’t it pretty cool that St. Nicholas was from the region where ancient Troy was located and that his successor, Santa Claus, first appeared in Troy, NY via the Dutch!

Hand-illustrated art by Ben Karis-Nix of Troy and Paper. 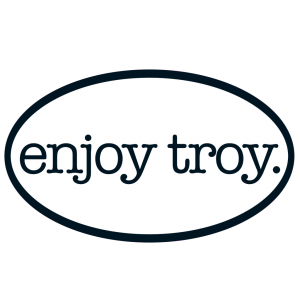 The Enjoy Troy Co. is a registered business in Troy, New York. It is owned and operated by Linda Passaretti and Tom Reynolds. The “enjoy troy.” symbol is a proprietary symbol. http://enjoytroy.us
View all posts by Enjoy Troy Co. →